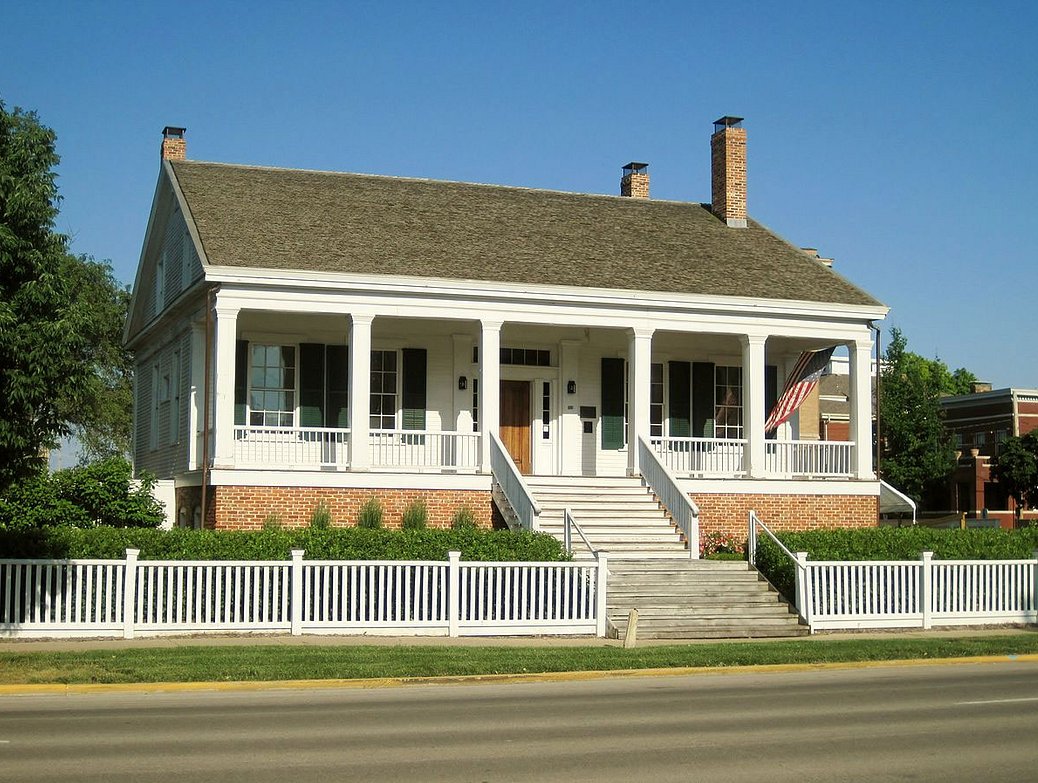 Built circa 1837, the Elijah Iles House has survived nearly intact for 185 years and is the oldest such structure in Springfield.  The Greek revival cottage, built by Elijah Iles (one of the four men who founded the city), is little changed since the day he moved in.  A timber framed structure on a raised brick foundation, it has three levels: a ground-level basement, the main floor, and a finished attic which provided sleeping quarters.

"Growing Up in Springfield"

Come to Dinner, Said the Bell

On Wednesday 4 May 2022, at 10 a.m. sharp, 25 people assembled on the east lawn of the Strawbridge-Shepherd House in Springfield.  The occasion was the first public bell-ringing of the Shepherd family's dinner bell since its return to the site.

The landmark house was built ca. 1841 by Thomas Strawbridge about 8 miles southeast of the center of Springfield on what was then a few hundred acres of excellent crop and orchard land. Charles M. Shepherd bought the home from him around 1880, added livestock and more land. Four generations of that family lived there until 1971. The next resident was founding President Robert Spencer of Sangamon State University.

Around that same time, Tom Shepherd moved to Ottumwa, Iowa farm, so he held on to the bell.  In late 2021 he brought it back to the house after a 50-year absence.  The iron bell, cast in Sidney Ohio around 1860 by the P.&R. Smith Foundry, had become very rusty and corroded, so earlier this spring Jim Patton had it sandblasted and repainted. He and Tom Heider sank a new post (after helpful post-hole-digging by the UI Springfield grounds crew) and reinstalled the bell.

Giving the first official ring were Charles’s five eldest descendants.  Rather than calling in the kids and field hands for their pork and beans and corn bread at mid-day, this time the bell started the crowd's snacking on cookies and sweet rolls provided by Questers Chapter 475.  Led by Mary Patton, the Questers donated the funds for the bell's reinstallation.

The Elijah Iles House Foundation manages the House on behalf of the landowner UIS and for the indoor use these days of two historical groups -- the Illinois State Historical Society and the Foundation for Illinois Colonial American Studies.  The EIHF thanks the Shepherd family and the Questers, as well as Jim and Tom the bell-men, for their work and care.

The interior woodwork is original and makes extensive use of black walnut. To make room for a new church, the house was moved in 1910 and refurbished and modernized with the installation of electricity, plumbing and radiator heating. In 1977, the House was listed on the National Register of Historic Places for its architectural and historic significance. In 1998, the House was moved again to its present location and fully restored, funded almost entirely by private donations. In 2005, with the restoration complete, the House was open to the public; regular tours are given on Saturday afternoons from April through October. The upper levels house an extensive collection of pre-Civil War furniture, and the lower level houses the Farrell and Ann Gay Museum of Springfield History.